PepsiCo Triples its Chances of Hooking Teens on Gatorade, Targets their "Emotional Relationship with Sports" 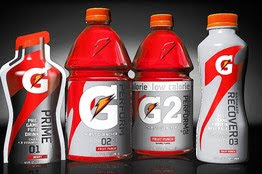 Every few years, when sales decline in a flagship brand, the parent company has to figure out how to "refresh the brand" to re-boost sales and keep investors happy. Such is the case now with PepsiCo's Gatorade line, which has been in a sales slump for three years.

Invented in 1965 by University of Florida researchers, Gatorade is PepsiCo's third-biggest selling global beverage brand after Pepsi-Cola and Mountain Dew. So when its sales declined 14% last year, this was cause for concern on Wall Street. Enter "G" brands, PepsiCo's first in a series of marketing strategies aimed at reviving Gatorade sales. If you've been wondering what all those G ads were for, you're not alone. But odds are, you're also not the target audience.

Critical to maintaining brand loyalty of course is reaching young customers. According to a recent story in the Wall Street Journal called, "Gatorade Before and After: PepsiCo's New Ad Campaign Aims to Boost Its Struggling Sports-Drink Business," the company says the renaming effort has been a hit with teens. To create the "G Series" line, Gatorade interviewed more than 10,000 teen athletes, parents and coaches, says WSJ:


The first stage of Gatorade's return to its athletic roots came last year with a makeover dubbing the drink "G." The move fell flat with some consumers who said they were confused by the new packaging, but [Gatorade's chief marketing officer] Ms. Robb O'Hagan said the "G" campaign achieved its aim of reconnecting with teenagers, who saw the drink as something "my parents drink."

Reconnecting with teenagers, the needed demographic to replace the aging consumers from previous decades, check. Now comes stage 2 of getting the brand off life support: inventing entirely new ways to promote the products as performance enhancing for athletes, or athletic-wannabes.

Not satisfied to merely be a thirst-quenching "sports drink," PepsiCo has created not one, not two, but three ways to drink Gatorade, called the "G Series." (No doubt, the "science" behind this new 3-pronged approach was cooked up at the PepsiCo-funded Gatorade Sports Science Institute, and yes, that's a real place.) Now kids can mimic their favorite basketball star before, during, and after the game. The three products—Prime, Perform and Recover—together will cost about $7, which is more than triple the price of one plain old 20-oz. Gatorade bottle. How brilliant is that, triple your sales while tripling the empty-calorie consumption, cha-ching!

But of course the costs may be much higher from the resulting health care stemming from the adverse health effects of promoting needless beverages to teens. As the WSJ notes, "teens are Gatorade's main target." And Gatorade's O'Hagan minced no words when she described the teen years:


It's the most critical time in their emotional relationship with sport. Without a doubt, that's when consumers enter the Gatorade franchise.

Emotional relationships, entering the franchise, does this sound like corporate responsibility to you? This is the same company that touted itself as being on board with Michelle Obama's Let's Move campaign to end childhood obesity. I guess Ms O'Hagan didn't get that memo.

The need to save a struggling brand by targeting teens could certainly explain why PepsiCo's recent announcement of a "global policy" on school beverages was suspiciously silent on Gatorade. When I tried to ask PepsiCo management about this disconnect, I was told the products were for "athletes" but no specifics were given on how to keep Gatorade out of the hands of non-athletic students, which, let's be honest, describes the overwhelming majority of sedentary kids these days.

In my research for Appetite for Profit, every nutritionist and health professional I spoke to agreed that the average teen certainly has no need for "sports drinks," at least not until we start suffering from a national de-hydration epidemic, which seems unlikely. Meantime, teens, who are already heavily targeted with PepsiCo's Pepsi-Cola and Mountain Dew brands, will now be bombarded with even more messages to drink highly-caloric, nutritionally-deficient beverages. As a result, we can expect even higher risks of obesity and related health problems that go along with over-consumption.

And with reports of PepsiCo spending $30 million to revive the Gatorade brand, the marketing effort is likely to succeed. Despite the company's claims of corporate responsibility, all that really matters to PepsiCo is the bottom line, and Gatorade is already showing positive signs of a comeback. Again, from the WSJ article:


"Gatorade is still down but it's not down as much as it has been previously," Chief Financial Officer Hugh Johnston said in an interview. "I really do feel good about the fact that we're getting the Gatorade business back on track."

At least someone feels good. I am feeling a little ill myself.
Posted by Michele Simon at 6:27 PM

What kills me is not the way kids want Gatorade, but the way PepsiCo has gotten PARENTS to want kids to have Gatorade. They have gotten parents to buy into the idea that when kids do ANYTHING physical they have to replace those electrolytes and drink some of that stuff, passing by regular ole water, which would solve any rehydration needs.

I hope the folks at Yale are getting a copy of this as they attempt to defend their PepsiCo affiliation!

Reading through this post, I began to feel that I now live in some sort of Bizarro World (or Wonderland, perhaps?) where up is down and down is up.

It's important to remember that the reason corporations do this sort of thing is to improve returns for their shareholders. Anyone offended by these practices needs to take a look at his/her portfolio and see if he/she is contributing to the perpetuation of these practices. The buck stops at the desk of the individual, not just the corporation. I often get the response of, "I only have mutual funds and it's just a tiny bit of these companies". Well, a bit here and a bit there adds up to a lot of harm to public health. Investing with so-called socially responsible brokers won't avoid this either. You just have to forgo stocks for real estate or buy your stocks individually.

The bottom line is that if there was no profit in these practices, they would diminish or stop altogether.