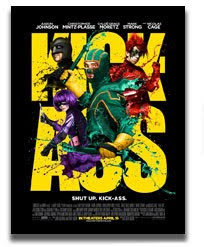 In a previous post I called out Iron Man 2 for its over-the-top product placement and co-branding deals with the likes of Burger King and Dr. Pepper, but now it seems another movie deserves top honors as shameless promoters of all things bad for you. As described by Brandchannel, the new superhero parody, Kick-Ass (I am sorry to have to even type that awful title) hawks no fewer than 40 brands. Here's how some of the products break down into what's bad for you, bad for the planet, and/or can maim you or others. PepsiCo scores the highest for most brands under one corporate umbrella (5).

I suppose that unlike with Iron Man 2, these movie producers could argue that there is no disconnect with superheroes eating and drinking and shooting and driving themselves into oblivion in a parody, but I still say given how popular this movie will be with young people, it's inexcusable. Yes, the film is rated R, but we all know how teenagers flock to R movies to feel grown up. But if these teens use many of the products promoted in the film, they may not get to.

What do you think?
Posted by Michele Simon at 7:42 PM

Well, I think this stuff (the products) are all over the place already, and while I don't welcome this latest bunch of nonsense, I'm not sure it matters much if you single out this particular movie. I don't recognize this culture anymore and am glad I'm on the way out, I guess.

Even the co-op I go to has a cooler full of goofy "beverages" that make some pretty dubious "health" claims on their labels for what is essentially tea or juice and sugar. They also have chips (fried) that say "Healthy" right on the front of the package--that would be a med size bag that contains EIGHT servings of 240 calories per serving--and, of course, we all only eat ONE serving--right? That would be 10 or twelve chips. Well, I don't eat them at all, but you get the idea.

Point is, it's everywhere, but I share your concern.

We tend to forget that the coporations who sell the prodcuts in many cases own the companies that make the movies or are tied to them financially...

To them its just another outlet for selling stuff.. anyone who has gone to the movies as of late and has sat through twenty minutes of commercials just to get to the previews knows what I mean!

Product placement has been around for a long time, and shows no sign of going away anytime soon. Welcome to the wonderful world of consumerism!!

So how do we get Bratz off the market and defuse corporate branding?