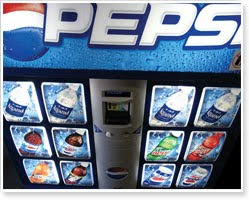 This past March, soft drink giant PepsiCo announced with much fanfare a new global school policy. The specific guidelines, to take effect by 2012, limit the types of beverages that are to be sold in schools. According to the press release, the policy will "stop sales of full-sugar soft drinks to primary and secondary schools."

That's why the announcement last week that Union County High School in Indiana was signing on to a brand new five-year contract with Pepsi (thereby ending its exclusive contract with Coca-Cola) came as a surprise. Not the contract itself, but what one school official had to say about it. From the news article:

They sure do, only problem is, PepsiCo says those products aren't for sale. Or are they?

I asked Derek Yach, director of Global Health Policy at PepsiCo for an explanation and he told me that the vending machines have not been put into place. He also said:


Our intent from the outset has been that the contract be 100 percent compliant with the American Beverage Association / Alliance for a Health Generation guidelines and other relevant PepsiCo policies. Our local teams in Indiana are well aware of this and will work closely with local school officials to ensure compliance.

Yach was referring to yet another voluntary policy announced by the soft drink industry back in 2006.

Someone should have probably clued in the school officials in Indiana at the time they signed the new contract. Were they even made aware of the PepsiCo policy not to sell the worst products, even if they are the most popular?

This raises many questions about how PepsiCo's school policy will play out in each school district. Indeed, the language of the policy is pretty vague on implementation and enforcement:


PepsiCo will encourage our bottlers, vending companies and third-party distributors to work closely with parents, community leaders and school officials to ensure that only products that meet the following guidelines are offered...

"Encourage?" "Work closely?" And while it's nice to mention them, what do parents and community leaders have to do with school contracts?

Here's what New York University Professor Marion Nestle, author of Food Politics has to say about the Indiana contract:


In my experience, you have to see for yourself, which is why I love visiting schools when I get the chance. With school officials in tow, you can watch kids using the vending machines during the lunch hour with nobody saying a word. The incentive here is to sell MORE product, not less, and that’s the problem.

Right. And here we have the odd situation where the vendors will essentially be telling its customers: Sorry, but we can't sell you Pepsi and Mountain Dew, those products that the kids love best and that will bring you all that extra cash you need to run your programs.

Let's see how well that works.
Posted by Michele Simon at 7:24 PM

I once had the experience of trying to get the soda machine out of my kids' school and met with resistance, not from a corporation or the administration, but from...PARENTS! It was the same when I protested our middle school adopting an "open campus" policy (which is just a license to eat total crap for lunch). Lots of parents seem to think that it is "normal" and "fun" for kids to eat and drink "popular" stuff. Go figure. Also, lots of parents (depending on location of school) own stock in Coke, PepsiCo, McDonald's, etc., and see nothing wrong with promoting these companies.