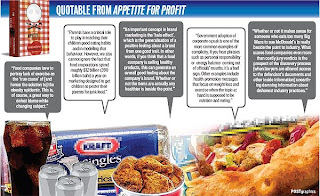 OK, so is not one my usual blog posts, but I can't help sharing my excitement. As I wrote about previously, my book has been translated into Thai, with 1,000 copies already distributed.

The translation and distribution of Appetite for Profit was commissioned by the Chulalongkorn University-based Health Consumer Protection Project, which is now releasing more copies, as was reported yesterday by the Bangkok Post. The article ("Taking a bite of out fast food: An expose details the industry's attack on food") includes graphics with pull-out quotes from the book.

If you're wondering why folks in Thailand would be interested in a book that is admittedly pretty America-centric, it seems there are warning signs that the problem is spreading there. For example, a survey conducted by the Thai Office of the Basic Education Commission found that sodas are available at 20 percent of the 20,000 schools in the country.

And this will sound familiar. Another study found some schools had agreed to allow a beverage giant to sell soda on school property in exchange for the company providing a van.

Here is how Siriwat Tiptaradol, Public Health Ministry deputy permanent secretary and the editor of the Thai version of the book explains it: "The influence of the food industry isn't limited to the US, but extends all over the world." The article also makes the case for policy change:


Developing countries like Thailand should be alert about this transnational issue and work with authorities, academics, and the public and private sectors to come up with policies to safeguard people from conditions that result from poor diet such as diabetes, high blood pressure and strokes. Otherwise, these problems will end up costing billions of baht in health care spending every year, Tiptaradol said.

A wise call for prevention before its too late.
Posted by Michele Simon at 11:23 AM