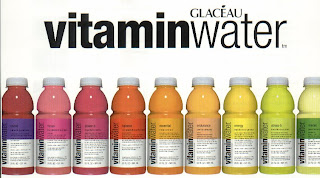 My friends at the Center for Science in the Public Interest (CSPI) recently scored an important court victory in its lawsuit against Coca-Cola for deceptive marketing of its product vitaminwater. (In case you missed it, the soft drink giant purchased Glaceau, maker of vitaminwater, back in 2007 for a cool $4.2 billion in cash.)
The class action, filed in January 2009 in federal court in New York, alleges that Coca-Cola's claims about vitaminwater's heath benefits are false, misleading, deceptive, and unfair. As CSPI's press release explained:

Vitaminwater's website, marketing copy, and labels claim that vitaminwater is healthy, claiming, for example, that "balance cran-grapefruit" has "bioactive components" that promote "healthy, pain-free functioning of joints, structural integrity of joints and bones" and that the nutrients in “power-c dragonfruit" "enable the body to exert physical power by contributing to the structural integrity of the musculoskeletal system."

If those claims sound like they belong on a pharmaceutical product, you're right. As CSPI notes, they go way beyond anything the Food and Drug Administration (FDA) allows "and cross the line into outright fraud." Then there's the sugar. According to CSPI, "the 33 grams of sugar in each bottle of vitaminwater do more to promote obesity, diabetes, and other health problems than the vitamins in the drinks do to perform the advertised benefits listed on the bottles."

An important hurdle in a lawsuit like this is surviving what's called a motion to dismiss. That's what Coca-Cola's lawyers filed to ask the judge to throw out the case before it can even get to trial. Last month, U.S. District Court Judge John Gleeson denied Coke's motion on almost all grounds, a huge victory for the plaintiffs.
In even more good news, the judge's language in his order was very favorable to CSPI. You can read why on Public Citizen's Consumer Law and Policy Blog, in a post by CSPI's litigation director Steve Gardner.
Here are a few highlights. The court said: "Because vitaminwater does not meet minimum nutrition requirements [of FDA law], any health claim about the product is contrary to FDA regulation." This is important because of what is known as the "jelly bean rule." As the court explains:


The FDA regulations restricting health claims (or implied claims of “healthiness”) to foods which meet certain minimum nutrient levels, colloquially termed “the jelly bean rule," were developed in order to prevent food producers from encouraging the consumption of “junk foods” by fortifying them with nutrients.

In other words, FDA developed this rule precisely with the type of marketing being deployed by vitaminwater in mind: promoting sugary soft drinks under the guise of good health and nutrition.

And then there's this:


The fact that the actual sugar content of vitaminwater was accurately stated in an FDA-mandated label on the product does not eliminate the possibility that reasonable consumers may be misled.

This is important because defendants often try to hide behind the federal nutrition labeling law to avoid being held liable under state consumer deception statutes. But the court rejected this argument. In doing so, the judge cited to an earlier decision in a lawsuit over Gerber’s “Fruit Juice Snacks” that nicely captures the reasoning:


We do not think that the FDA requires an ingredient list so that manufacturers can mislead consumers and then rely on the ingredient list to correct those misinterpretations and provide a shield for liability for the deception. Instead, reasonable consumers expect that the ingredient list contains more detailed information about the product that confirms other representations on the packaging.

Translation: Front-of-package marketing should match what's in the nutrition facts on back. Imagine! (My colleague Marion Nestle has long called on FDA to fix the problems associated with front-of-package labeling - see her recent commentary in JAMA on this very topic.)
Last week, author John Robbins wrote on Huffington Post about the "staggering feat of twisted logic" by lawyers for Coca-Cola by asserting that "no consumer could reasonably be misled into thinking vitaminwater was a healthy beverage." He wonders:


Does this mean that you'd have to be an unreasonable person to think that a product named "vitaminwater," a product that has been heavily and aggressively marketed as a healthy beverage, actually had health benefits? Or does it mean that it's okay for a corporation to lie about its products, as long as they can then turn around and claim that no one actually believes their lies?

Excellent questions. At least one judge isn't buying Coke's silly defense. And apparently this case has touched a nerve, as least with HuffPo readers. According to the site's stats, Robbins' article is the most popular this week, with close to 600,000 views. Also, so far the article has more than 1,000 comments, with over 13,000 Facebook shares and over 22,000 posts to Twitter. I asked John Robbins what he makes of this response and here's what he told me:


I am grateful to the 35,000 or so people who have posted the article I wrote about the dark side of vitaminwater to their Facebook pages and/or tweeted about it. Coca-Cola would like us to believe that it’s a responsible corporate citizen, but the truth is decidedly otherwise. In fact, the company constantly lies to the public. What’s even more insulting, Coke then has the audacity to turn around and say, in court, that a product they have marketed as healthy actually isn’t, and the public would  have to be stupid to think otherwise.

This case should put all food companies on notice that they can't dress up junk food and nurtitionally-deficient beverages with healthy-sounding names or over-the-top marketing claims.
Often once a case survives a motion to dismiss, the defendant is more likely to negotiate a settlement and change its marketing practices to avoid expensive and embarrassing litigation. Stay tuned.
Posted by Michele Simon at 1:32 PM

Thank you so much for your excellent work and for these enlightening articles.

The wellness committee at my kid's school got sucked into the halo of Vitamin Water. Sure hope they feel sheepish now!

The best part of your expose is the contorted excuses made by Coke to defend its advertising. They should go into a Monty Python skit. Linda Riebel

Excellent and insightful article. Vitamin Water's not much healthier than Coke itself.

Makes me think of those charlatans in the old west and beyond selling their "tonics" that would cure everything from menstral cramps to arthritis! LOL!

it still has half as much sugar as coke, and some flavours have a full day's worth of vitamins. healthy is relative. dehydration isn't healthy either, and the benefits i get from being properly hydrated outweigh the sugar i'm ingesting. for me, it's healthy.

@Anonymous (the second one)

Plain water will prevent dehydration perfectly well for all but the most elite athletes. If you want to pay up to $2 for a few vitamins in sugar water, that's up to you, but don't delude yourself that there is ANY health benefit to it. So eat an apple or some watermelon--you'll get water, vitamins and be refreshed at the same time!

Michelle, this is great news--I hope PepsiCo is paying attention!

It's all so silly. Why don't they just sell vitaminwater with only the vitamins and the water? CCC would be marketing a healthy product, the water-buying public would be healthier, and we could all go about our lives knowing that truth and sensibility prevailed in at least one beverage product. Maybe the plan all along was for them to fall on their sword, change their ways, take out the sugar, and rack up loads of free advertising in the process. Stay tuned to see what happens next.

I'm so glad we stopped drinking Coca-Cola products a year ago. I haven't tried this Vitaminwater but thankfully, I didn't. You can't really trust what large corporations like Coca-Cola tells you about being 'healthy' and 'nutritious'.