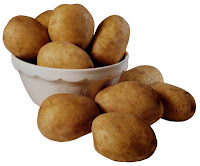 In case potato chips lovers had no idea where their favorite salty snacks came from, America's largest chip maker has launched a new ad campaign clearing up the confusion once and for all.

As explained by the New York Times this week (in the advertising section, not food, and rightly so) the ads appear to stem from recent concern over the high salt content and other nutritional challenges of the likes of Lay's. To quote columnist Stuart Elliot, the campaign "is intended to help consumers think of Lay's as a food rather than a snack" and is "centered on farmers who grow potatoes for the maker of Lay's, the Frito-Lay unit of PepsiCo."

Not to miss out on the current "love your local farmer" movement, the campaign features ads of regional farmers in local markets, along with an online "Happiness Exhibit" photo gallery at lays.com.

The Times describes why the stakes are so high. Lay's is PepsiCo's third best-selling product, second only to the company's Pepsi-Cola and Mountain Dew brands. Total Lay's sales topped $2 billion last year. Yet, growth is the key to continued success, and according to the Times:


Sales growth for Lay’s had slowed to less than 1 percent from 2005 to 2007, raising concern among executives at Frito-Lay as well as PepsiCo.

Surveys revealed that Frito-Lay had a perception problem on its hands. Apparently, a third of respondents thought the ingredients were "not real potatoes." That's when the marketing machine sprung into action. New ads were designed to convey the "three simple ingredients" in the main variety of Lay’s, called Lay’s Classic: potatoes, "all-natural" sunflower oil and "a dash of salt."

Oh wait, they also left out the local factory workers who put the bags into boxes, seal the boxes and get them ready to leave the factories. And who can forget all the local truckers who have to drive the big trucks to the regional distribution centers before they can be delivered by yet other local truck drivers to all those local stores. Nope, just gonna focus on the local farmers. Wonder why?

I thought this local angle sounded familiar. Indeed, when Frito-Lay first tried to go the "Local Lay's" route last year, there was plenty of skepticism to go around. (See for example, Frito-Lay Embraces Local Movement, But Movement Does Not Embrace Frito-Lay.)

Also, I was interviewed for this article in Ad Age at the start of the campaign and called it disingenuous then. (That was an understatement.) Here's what else I had to say about it:


Let's be honest: It's processed junk food. It's just companies scrambling to save themselves as they see the trend happening as people are waking up and getting a clue that maybe packaged food isn't good for you.

Then I got the last word in that story:


They have factories all over the country so they're locally processed? Give me a break. That's hilarious. You might as well say 'I rolled this cigarette in my backyard so it's local.'

Sorry for recycling old quotes, but if it still works, why not?

Thanks to my esteemed colleague Marion Nestle who pointed me to this story. Her clever name for it? Farmwashing!

Posted by Michele Simon at 9:07 PM

Maybe next they can farmwash sodas as being made with local GM beet sugar and corn syrup, and locally synthesized 'natural' chemical flavorings! Mmmm, local and natural..! Imagine how a soulless marketing brand manager could spin those terms into a meaningless story to educate the brand fans throughout all of their contrived faux social network communities.

The blatant scheming and worthlessness of it all nauseates me…

You and Marion Nestle work in such lovely harmony. My two favorite authors--and blogs.

Since Lay's also makes Pringle's--which aren't so clearly "real" potatoes, you can see where people might confuse the two products. PepsiCo could hardly attack one of their products to boost the other, could they? What a dilemma!

Please feel free to recyle your quotes as I may not see them elsewhere and would hate to miss them.

I love the term "farmwashing"--which is the basis for much food advertising. Smiling chickens sitting on nests with red barns in the background, "farmers" in overalls, Juan Valdez and so on. All trying to convince us that the quaint family farm produces our food. The efforts of Lay's to capitalize on the "local" movement is pathetic at best.

Surely consumers aren't silly enough to start thinking fried potato chips are a natural, healthy product? Just because they start out as potatoes doesn't mean people don't know about the processing. I hope!

Of course people know that chips are junk on a cognitive level, but what Lays, et al, work on is the psychological, not the cognitive. They spend bazillions finding out what people respond to. The picture of the nice wholesome potato conveys the idea that this is just a bag of sliced, yummy potatoes. Since most people are already programmed, from years of viewing commercials, to want the snack ("you DESERVE it" goes the message over and over ad nauseum), the homey image counteracts the knowledge that this is really just a bag of greasy fried and heavily processed things that started out as a potato grown on a megafarm with lots of chemicals and harvested, perhaps, by very poor people who have little access to medical care or even schools for their children, and who may have long-term health problems from the pesticides and herbicides they are exposed to. Potatoes may be pretty much mechanized for harvest, but if it's not the harvesters being exploited, it's probably the workers in the chip factory. None of these people appear on the bag--and if they did, it would be something along the lines of Juan Valdez or Mrs. Butterworth.

Extraordinary find on the PepsiCo/FritoLay/Lunchables video: from Marion Nestle's blog.

I know this is a different area of law, but since I've done lots of TV work, it's only rarely I've been able to avoid signing a release when I care. I wonder if the parents of those kids signed releases for use of their children: their innocence and joy will be used to sell more Lunchables, certainly one of the worst foods for kids.

For several years while doing RealAge talks, I traveled cross country many times with the same Lunchables box and foods...which never spoiled or changed shape or form. And of course, there was more fiber in the box than in the food.

Great Opportunity for my business modular kitchen In Chennai & Modular Kitchen in Chennai. I need support to approval the comment some people view our business.

I saw some beautful kitchen reviews is more helpful to us.