Wondering where in the world Big Food will put 1.5 trillion calories? 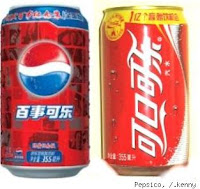 Last week, 16 major packaged food companies "pledged" to Michelle Obama's Let's Move campaign that they would somehow remove 1.5 trillion calories from the U.S. food supply by the end of 2015. As I wrote here, there are many reasons to be skeptical about this announcement. Since my post others have chimed in with their own doubts. For example, see business writer Melanie Warner's excellent analysis, Food Industry's Calorie Reduction Pledge: Smart Marketing, but Dumb Nutrition.

I also had this nagging feeling that even if these food companies were to honor their promise, those calories would not just disappear, rather they would likely just turn up in other countries. Sure enough, with the ink barely dry on the calorie-reduction agreement, in came a press release from one of the most important pledgers - PepsiCo.

PepsiCo proudly announced that it's investing $2.5 billion in China, on top of the $1 billion the company has already spent there since 2008. The soft drink and snack food giant intends to build a dozen new food and beverage plants, to add to the current 27 facilities.

According to the Wall Street Journal, this announcement, made at the Shanghai Expo, indicates stepped-up competition with Coca-Cola, who announced its own $2 billion investment in China late last year. (Both companies are major sponsors of the Expo.) WSJ explains why Coke and Pepsi are so eager to find fertile ground:


Both beverage giants are expanding aggressively in China, India and Russia, among other emerging markets, where growth is much faster than in the U.S. Soft-drink sales have declined for five years in the U.S.


Its international business boosted first-quarter results, with its Asia, Middle East and Africa unit posting 13% growth in snack volume and 10% in beverage volume, largely because of growth in China and India.

Meanwhile Coca-Cola, never to be outdone by PepsiCo in the chutzpah department, quietly announced, the week prior to the Big Food White House Pledge, that they were investing $300 million in Pakistan. The plan is to build two more (adding to the current six) manufacturing plants in that country. This is another direct challenge to PepsiCo, which already has a major presence in the Middle East. (A friend who is currently teaching at Lahore University of Management Sciences tells me that students there eat in the "Pepsi Dining Center.")

One article explains Coca-Cola's motives: "Pakistan is a growing market. It has a population of 170 million and majority of them are youngsters," said Rizwan U Khan, Coca-Cola’s country manager for Pakistan and Afghanistan. "We view this country has a favourable place for expansion."

The majority are youngsters, of course, since youth is the optimum time to get more loyal customers. Funny how we didn't hear any such honest assessment coming out of Big Food last week at the White House. They were on their best behavior there. And while PepsiCo previously endorsed the First Lady's Let's Move campaign, it seems Big Food only cares about childhood obesity in America. Indian kids, Pakistani kids, Chinese kids, who cares?

Of course, the cigarette industry wrote this playbook years ago. Once regulations started becoming inhospitable in the United States, Big Tobacco just stepped up their marketing efforts overseas, especially in the developing world and as a result, smoking is an international epidemic. To quote Dr. Margaret Chan, World Health Organization director-general:


If Big Tobacco is in retreat in some parts of the world, it is on the march in others. As we all know, the tobacco industry is ruthless, devious, rich and powerful.

Just replace the word tobacco with food in that quote, and you will see our future.
Posted by Michele Simon at 5:33 PM

I had the same thought after reading your post--and another one--is there any real meaning in "one trillion calories"? With a population of 350 million, well I can't do the math there; how many zeroes is a trillion?, but what is the actual, or even imagined, impact of such a statement?

Excellent points. Thanks for keeping us informed on this topic!

Doesn't this defy the law of conservation of energy? Who was it that said, "energy cannot be created or destroyed?" I find it very troubling to think that those calories are going to end up in the diets of youth in developing nations.