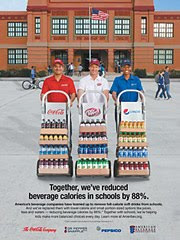 This revealing March 9th Ad Age article describes how soft drink giants Coca-Cola, PepsiCo, and Dr Pepper Snapple Group have teamed up to run ads showing off about how they are removing sugary soft drinks from schools. The companies claim an 88% decrease in calories since 2004, but some experts are skeptical about the health impact.

And the timing of the ad campaign seems awfully suspicious, as Ad Age notes:

While the school initiative was in place well before the industry was put on the defensive against the proposed taxes, the promotion of the program is certainly well-timed. New York Gov. David Paterson has called for a one-cent-per-ounce tax on sugar-sweetened beverages, while Philadelphia Mayor Michael Nutter last week proposed a two-cent-per-ounce tax on sugary beverages.

The soft drink industry certainly knows how to deflect attention and confuse the issues. Calling their latest "initiative" (is anyone else sick and tired of hearing that word?), "Clear on Calories," Big Soda seems to think that placing calorie numbers on the front of beverage containers and vending machines equals good nutrition and "has painted the voluntary commitment as an answer to First Lady Michelle Obama's call to eradicate childhood obesity." Funny, I don't remember seeing anything about soda calorie labels in the First Lady's program.

The ever-ready with a quote PR guy Kevin Keane, of the American Beverage Association (i.e., lobbying trade group) explains: "These are the fiercest rivals you're going to get. But our companies felt [the campaign] was the strongest way to convey what they'd done and that they'd done it together." How warm and fuzzy. Of course, these same companies have been lobbying together for years to undermine school nutrition policy, so this teamwork is really nothing new.
Posted by Michele Simon at 8:47 PM