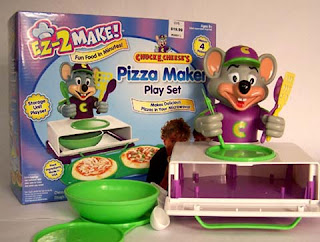 The Center for Science in the Public Interest, that venerable organization that never seems to tire of studying the same problems over and over again, has once again demonstrated that food and media companies are failing miserably when it comes to improving its marketing practices toward children. The report gives 3/4 of companies reviewed a failing grade for either having weak policies or having no policy whatsoever. The report's poster child (so to speak) is shown here, Chuck E. Cheese's "pizza maker," which doesn't actually make pizza, thankfully.

From the press release is this horrifying product description:

Candy company Topps also got an F. That company makes, among other things, Baby Bottle Pop, a powdered candy sold in a miniature baby bottle, eaten by dipping a candy nipple in a sugary powder and licking it off. Over the years Topps has retained the services of the Jonas Brothers and the Clique Girlz singing groups to convince children to purchase that infantilizing product, whose 140 calories all come from sugar.

Gross. Since this is hardly earth-shattering news, the real question is when we are going to see any political will to do something about it. While Michelle Obama's "Let's Move" program is admirable for its emphasis on school nutrition and food deserts, it's painfully silent on junk food marketing. No amount of exercise can overcome the food habits being pushed on America's kids by Corporate America's billions of advertising dollars. Let's move on that.
Posted by Michele Simon at 4:05 PM