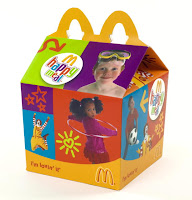 It was only a matter of time. Last month, the Center for Science in the Public Interest (CSPI) served McDonald's with a notice of its intent to sue if the fast food giant continues to use toys to promote Happy Meals. (An "intent to sue" letter is a prerequisite to filing a lawsuit in some states.) The basis for the potential case is that using toys to market to small children is unfair and deceptive under the consumer protection laws in a number of states. According to CSPI's letter, McDonald's toy promotions violate the laws of California, Massachusetts, New Jersey, Texas, and the District of Columbia.
CSPI's litigation director Stephen Gardner explained in a statement that "McDonald's is the stranger in the playground handing out candy to our children. McDonald's use of toys undercuts parental authority and exploits young children's developmental immaturity."
The letter more specifically spells out the legal basis for the case:

McDonald’s practices are predatory and wrong. They are also illegal, because marketing to kids under eight is (1) inherently deceptive, because young kids are not developmentally advanced enough to understand the persuasive intent of marketing; and (2) unfair to parents, because marketing to children undermines parental authority and interferes with their ability to raise healthy children.

This is important because CSPI is saying that McDonald's practices are both deceptive to children and unfair to parents, the latter to deflect the argument that it's really all the parents' fault. For that perspective, CSPI's press release quotes Sheila Nesbitt of Minnesota, a parent of a six-year-old boy and a three-year-old girl:

McDonald’s makes my job as a parent more difficult. They market cheap toys that appeal to kids and it works. My kids always want to go to McDonald’s because of the toys. I try my best to educate my kids about healthy eating but it's hard when I am competing against the allure of a new Shrek toy.

According to a CSPI study, despite McDonald's recent attempts at healthwashing Happy Meals with Apple Dippers and milk, French fries come with Happy Meals 93 percent of the time. The letter also explains the harm that Happy Meals cause:

McDonald’s practice of dangling toys in front of children is illegal, regardless of what meal the child eventually gets. Not only does the practice mobilize “pester power,” but it also imprints on developing minds brand loyalty for McDonald’s. Because most of the company’s options are of poor nutritional quality, eating Happy Meals promotes eating habits that are virtually assured to undermine children’s health.

Next, the letter explains how voluntary, self-regulation by industry has been a dismal failure:

Through the Children’s Food and Beverage Advertising Initiative of the Council of Better Business Bureaus, McDonald’s pledged to advertise only Happy Meals that meet McDonald’s nutrition standards for children. However, that pledge fails to address McDonald’s insidious use of toys to market its products to children. Regardless of the Happy Meal combinations shown in advertising, the vast majority of possible Happy Meals are nutritionally inappropriate for children.

This is important because (as documented in my book, Appetite for Profit) McDonald's, along with every other major food company, has been hiding behind the veil of self-regulation of marketing to children for years. And sadly, the federal government has so far been going along with the charade. This lawsuit could become one way to expose this ruse, and even lay the groundwork for changing the laws to protect children. Because companies fear lawsuits even more than they fear regulation, the case could be a game-changer.
McDonald's response in the press has been to defend the Happy Meal, not surprisingly. William Whitman, vice president of communications for McDonald’s USA, told Nation's Restaurant News: “We are proud of our Happy Meal, which gives our customers wholesome food and toys of the highest quality and safety. Getting a toy is just one part of a fun, family experience at McDonald’s.”
It's all fun until someone gets hurt. Chicken McNuggets are wholesome? Here are the ingredients, as listed on McDonald's own website:

Toys of the highest quality and safety, like those toxic Shrek glasses?
As I wrote about here in April, the Santa Clara County, Calif., Board of Supervisors passed an ordinance to stop chain restaurants from using toys or other kid-oriented incentives to market unhealthy meals. This case is a logical next step and is certainly more efficient than going county by county to get fast food chains to halt this insidious practice. Of course, this case will only be about McDonald's, for now. Other food chains (think Burger King) that don't want to be next may be forced to re-think their kids marketing practices as well.
Of course, already the potential case is already being attacked by those who say it's all up to parents. CSPI's executive director Michael Jacobson responds to the parental argument this way:

I’m sure that industry’s defenders will blame parents for not saying ‘no’ to their children. Parents do bear much of the responsibility, but multi-billion-dollar corporations make parents’ job nearly impossible by giving away toys and bombarding kids with slick advertising.

So will this case mean the end of all toys in Happy Meals or will CSPI settle for McDonald's setting nutrition standards on those meals the company markets with toys? CSPI's not saying, but Michael Jacobson did say in the press release that "regardless of the nutritional quality of what’s being sold, the practice of tempting kids with toys is inherently deceptive." I couldn't agree more.
McDonald's has 30 days (from June 22) to stop marketing with toys before a case is filed. I asked Steve Gardner today if he's heard back from McDonald's yet and here's what he said:


We've gotten an acknowledgment from McDonald's that they got the letter, but no response to the suggestion that we discuss before suit is filed. One thing is certain: if McDonald's chooses not to negotiate, we will sue.

And that's when things will get interesting. For those who think lawsuits are too extreme, consider this: We have only three branches of government, and two have been failing us for too long. The executive branch, even with Obama at the helm, has shown little interest in fixing the problem of junk food marketing to children. And the legislative branch (aka Congress) has been bought out by corporate interests for decades. That leaves only the judicial branch, which is why this case make sense, and why it was only a matter of time until someone sued over this issue.

Meantime, you can take action by sending an email message to McDonald's CEO Jim Skinner asking the company to stop marketing toys to kids. You can also join a related campaign by Corporate Accountability International asking McDonald's to Retire Ronald.
Posted by Michele Simon at 10:23 AM

The marketing strategies of McDonald's do not stay at McDonald's but are replicated throughout the industry. There are the other fast food chains, of course, but there are also places such as zoos and theme parks which hand out toys and goodies as part of their kids meals. The occasion of having lunch is less about the food than it is about the toy. We need to get back to having a meal for lunch and not shopping for a new toy that will end up between the seat cushions.

The Chicago Tribune posted a very brief piece on this and also a poll. How informed are people before they click away? Their facebook page shows more on that. http://newsblogs.chicagotribune.com/tribnation/2010/07/joe-camel-is-selling-happy-meals.html#tp

As a teacher I find it so annoying when the kids turn up at school flaunting the latest happy meal toy. Then it also becomes a peer group pressure thing for the kids. They can't escape.

The “CSPI vs McDonald’s” “feud” is nothing but a fake WWE-style PR stunt designed to give McDonald’s free publicity. One of the steering committee members of CSPI’s National Alliance for Nutrition and Actiity (NANA) coalition is the American Dietetic Association……A MCDONALD’S FRONT GROUP. The so-called “food police” are just as much food industry shills as the shills at the Center for Consumer Freedom.

My feeling is that the CSPI is blatantly wrong on a few counts in this particular lawsuit. Marketing to children is a common practice for many businesses... toys, clothes, books, ect.... you name it, and yet no one is claiming it's unfair for these other industries to advertise to children. As far as McDonald's being unhealthy, so what! This is America and there should never be a law that forces people to eat certain foods or requiring that parents must only feed their children what some agency says is healthy. With that said... I think I'm gonna go get myself a Big Mac.